On 4 July 2018, the first online tandem seminar took place between the interdisciplinary LOEWE focus, Gießen / Marburg and the German Faculty of Babeş-Bolyai University, Cluj-Napoca. Under the direction of Dr. Eszter Gantner (Marburg) and Prof. Dr. med. András Balogh (Cluj) was with thirteen other participants on both sides about the key questions

How does region / regionality influence identity constructions?
How does identity build on the region?
Is region imaginative?

discussed. The participants met for this in a virtual conference room of the open source provider BigBlueButton, whose infrastructure provides the opportunities for scientific exchange. In addition, the Open Science Framework was used for the preparation. The platform provides shared access to files that underlie a project. An exchange about the planned project was already created in advance.  Schedule, texts and guidelines for the technology could be called up at any time and from anywhere. 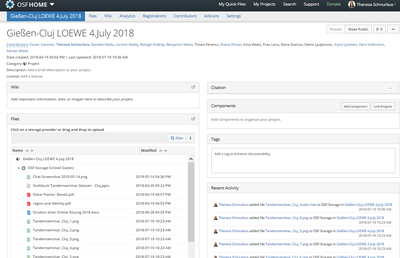 In a short introductory round, one quickly gained personal access to the members, which enabled a lively discussion in the second phase. In this the participants were divided into so-called break-out rooms. Within the break-out rooms, the questions in small groups were explained and discussed in more detail. After an intensive working phase of 45 minutes, the results were presented back in the main chat using MS Office solutions. It should be noted at this point that further software solutions that create an even more interactive atmosphere (e.g., prezi) will be tested for future tandem seminars. The final feedback and final discussion was supported by an evaluation by surveys survey monkey. 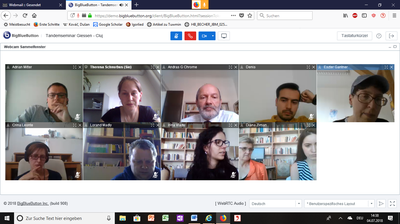 From the survey results and the feedback round, we conclude for future tandem seminars that a group size of 10 people should not be exceeded. An introductory session on technology was considered useful by all respondents. Moderation and leadership of the session were also rated positively. Since the group of this session was quite large, the text size was also perceived as too large. It was noted, however, that this would be offset by prolonged speech in a smaller group.

Particularly appreciated was the personal atmosphere that has led to lively discussions. There was a lot of laughter between serious exchanges and the participants would mostly repeat such a format with pleasure.

At this point we thank Prof. dr. András Balogh, dr. Daniela Vladu and Lorand Madly for the good cooperation and the successful course of the tandem seminar!